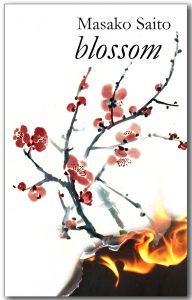 Launch of blossom (Japanese title: 耐えて桜), the first translation for Donko Books, will take place on 21 February. Appropriately it is a romantic thriller based on the life and loves of the Japanese courtier and waka poet Ariwara no Narihira

blossom was written by Masako Saitō, a novelist and authority on medieval Japan. After her first novella earned the praise of Yasunari Kawabata, she produced a string of admired books on the literature and culture of classical Japan. Her final and greatest work was blossom.

The translator Don Sanderson first benefited from the knowledge and insight of Masako Saitō when she assisted him with his translation of Shūichi Katō‘s A History of Japanese Literature.

Publishers of translations of Japanese literary works. First translation 'blossom' (耐えて桜) was launched on 21 February 2017, the birthday of the author.
'blossom' was written by Saito Masako, a much respected and admired authority on medieval Japan.
The translator Don Sanderson worked with Saito Masako translating the final two volumes of Kato Shuiichi’s 'A History of Japanese Literature'.
“Don Sanderson is to be congratulated on the high quality of his translation ... ” Monument a Nipponica